Physicists from the Collaborative Research Center 1258 (SFB1258) at the Technical University of Munich develop a new method to determine the velocity distribution of dark matter (DM) particles in our solar system by making use of measurement constraints from different experiments. In this way, the maximal and minimal number of signals in a direct DM detection experiment can be calculated. The authors apply the method to the results of the DAMA Dark Matter experiment and assess the prospect of observing a Dark Matter signal for the future experiment LUX-ZEPLIN. 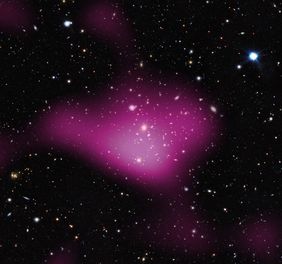 Since the 1930s various astronomical observations lead to the conclusion that the Universe consists not only of the matter we can see with telescopes, but also of invisible matter. This invisible or dark matter constitutes a portion of about 25% of the Universe's mass. Theoretical particle physics suggest that this dark matter (DM) might be of particle nature – DM particles that interact with the visible matter only through the gravitational and weak force. The former is the same force that lets apples drop from trees, while the latter powers radioactivity. For these hypothesized very light and very small elementary particles, the strength of both forces is supposed to be extremely small. Hence, interactions with the visible matters are possible, but very rare.

The rate of particle interactions in the detectors depends on the flux of DM particles in our solar system and hence on the amount of particles and their velocities. The former is well inferred from astronomical observations, while the latter is unknown.

Usually, a Maxwell-Boltzmann distribution is assumed

A common approach is to assume a Maxwell-Boltzmann velocity distribution - the same that can describe the velocities of molecules in air. However, for DM particles this assumption might hold only for very large distance scales, larger than our solar system. Within our solar system the particle velocities might deviate from the Maxwell-Boltzmann distribution rather strongly, which has a large effect on the interpretation of the results from DM detector experiments. Therefore, it is important to be able to derive the results in a way independent of the velocity distribution.

Alejandro Ibarra and Andreas Rappelt, scientists from the Collaborative Research Center 1258 (SFB1258) at the Technical University of Munich have developed a new method to calculate the expected number of particle interactions in a DM detector without making any assumptions on the DM velocity distribution, and by taking into account constraints from other detector experiments.

The DAMA signal infers a DM mass above 4.5 TeV

Ibarra and Rappelt applied their method to investigate the compatibility of the DM annual modulation signal claimed by the DAMA experiment with the null results from other direct and indirect DM detection experiments (PandaX, Pico60, IceCube and Super-Kamiokande). They find that the DAMA signal can only be made compatible with the null results by having a very fine-tuned low velocity dispersed DM velocity distribution and a fairly large DM mass of greater than 4.5 TeV, which is considered very unlikely.

With respect to the future DM detection experiment LUX-ZEPLIN (LZ) and in view of the present null results from IceCube, Super-Kamiokande, SuperCDMS and Pico60 the authors utilized the new method to assess the prospects to observe a DM signal with this future experiment. Depending on the actual DM-nucleon scattering cross-section and DM mass, a signal will be detectable for none, a subset, or all possible DM velocity distributions.