One of the fundamental questions in particle physics is still unanswered: Are neutrinos their own antiparticles? The search for an answer leads to an extremely rare nuclear decay process, the neutrinoless double-beta decay (0nbb). While paving the way for a new ton-scale experiment, the GERDA scientists now have reached a new lower limit on the decay’s half-life. The achievement is reported in Physical Review Letters. 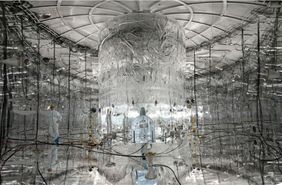 Looking into the interior of the GERDA detector (photo: K. Freund/GERDA collaboration)

Despite many years of research, several properties of neutrinos are still unknown. Among them is the fundamental question whether neutrinos are their own antiparticles, so called Majorana particles, as first suggested by the Italian physicist Ettore Majorana in the 1930s and these days predicted by several extensions of the standard model of particle physics. The most sensitive way to test the theory is a radioactive decay that is allowed in certain isotopes in which two protons are simultaneously transformed into two neutrons emitting two electrons and two neutrinos. If neutrinos are their own antiparticles this double beta decay can occur without the emission of neutrinos. Until now, this hypothesized process of neutrinoless double beta decay (0nbb) could not be observed.

One of the leading experiments

Because of the importance of 0nbb decay in revealing the character of neutrinos and new physics, there are about a dozen experiments worldwide using different techniques and isotopes, primarily Ge-76, Te-130 and Xe-136. The <link https: www.mpi-hd.mpg.de gerda external-link-new-window internen link im aktuellen>GERDA experiment is one of the leading experiments in the field, conducted by an European Collaboration. It is located in the underground Laboratori Nazionali del Gran Sasso (LNGS) of the Italian research organization <link https: www.lngs.infn.it _blank external link in new>INFN.

GERDA uses high-purity germanium detectors enriched in the isotope Ge-76. Since the germanium is source and detector at the same time, a compact setup with minimum additional materials can be realized leading to low backgrounds and high detection efficiency. The excellent energy resolution of germanium detectors and novel experimental techniques developed by the GERDA collaboration provided unprecedented suppression of disturbing events from other radioactive decays, such that GERDA was the first background-free experiment in the field. Since 0nbb decay has a half-live of many orders of magnitude higher than the age of the universe, the reduction of background events is most crucial for the sensitivity.

In the Journal Physical Review Letters (PRL), the GERDA physicists are now reporting a new best limit on the half-life for neutrinoless double beta decay better than 8 x 1025 years, improved from 5 x 1025 reported in April 2017. GERDA continues to collect data and is projected to reach a sensitivity on the half-life well beyond 1 x 1026 years soon. In the same issue of PRL, the other current generation Germanium-76 experiment Majorana Demonstrator at the Sanford Underground Research Facility, USA, publishes a new half-life limit of 1,9 x 1025 years.

Since a large detector mass and a long measuring time are key parameters to these experiments, both groups have joined recently to form the new LEGEND collaboration to pursue a ton-scale Ge-76 experiment with the potential to discover neutrinoless double beta decay at a half-life approaching or at 1028 years.