Another prestigious award for a principal investigator of the SFB1258: Susanne Mertens, professor at the TUM and a research group leader at the Max Planck Insitute for Physics, receives an ERC starting grant for searching for sterile neutrinos within the KATRIN experiment. 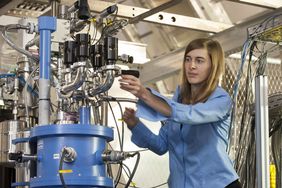 Alongside the known three types of neutrinos which interact with other matter, sterile neutrinos could also potentially exist. They would be heavier than known neutrinos and their interaction with other particles would be much weaker. Prof. Mertens intends to search for these hypothetical particles as part of her SENSE project. Her most important tool is the KATRIN experiment conducted at the Karlsruhe Insitute for Technnology (KIT), in which the decay of tritium causes electrons and neutrinos to be released – some of which could turn out to be sterile neutrinos. Proving the existence of sterile neutrinos could solve the mystery surrounding dark matter, which makes up one quarter of the universe. Sterile neutrinos are promising candidates for this dark matter. As a researcher in the MaxPlanck@TUM program, Prof. Susanne Mertens is Professor of Dark Matter at TUM while also heading up a research group for experimental neutrino physics at the Max Planck Institute of Physics.