How does matter behave under extreme conditions, as expected for example in neutron stars or neutron star mergers? The HADES collaboration now reports of the first observation of a state of matter produced in a heavy ion collision that resembles the matter expected to be formed in a binary neutron star merger. The research group of Prof. Laura Fabbietti from TUM, who is also a principal investigator of the SFB1258, was significantly involved in preparing and conducting the experiment. The results have now been published in Nature Physics. 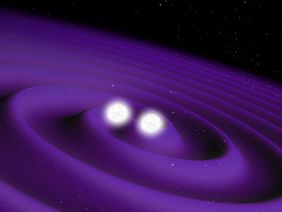 The <link https: www.ph.tum.de about people vcard b96b219d9371ed40 external-link-new-window internen link im aktuellen>HADES experiment was designed to better understand where the mass of matter comes from. The nuclear particles, the protons and neutrons, are composed of three quarks that are bound together by the strong interaction. But mysteriously, the three quarks only make up one percent of the mass of the nucleons. So, where do they get the residual 99 percent of their mass from? The physicists assume, that the answer is hidden in a cloud surrounding the quarks that consists, among others, of quark-antiquark pairs that spontaneously emerge and decay.

Particles are acclerated to 90 percent the speed of light

To gain insight into that clouds, heavy ions are smashed at each other at HADES with 90 percent the speed of light. When the nucleons collide, immense temperatures and densities are reached for a trillion of a second, forcing the quark-antiquark pairs to react. They produce new particles of high mass, that finally decay into electron-positron pairs, also called dileptons.

These dileptons are unique messengers of the properties of strong-interaction matter under extreme conditions: They are emitted throughout the evolution of the collision and, since they are not not subject to the strong interaction, leave the collision zone unhindered and carry information that cannot not be detected otherwise. But extreme conditions not only exist - for the fraction of a second - in particle collisions, but also in one of the densest objects of the universe - neutron stars.

In these remnants of core collapse supernovae, matter is so compacted that the electrons of the atomic shells are squeezed into the protons to form neutrons. But little more was known until the first detection of gravitational waves from the merger of two neutron stars in 2017. New model calculations based on that groundbreaking observation suggest that temperatures of 50 - 80 MeV and densities around twice the densities of normal nuclear matter might be reached in a postmerger neutron star configuration.

Strikingly, very similar densities and temperatures of the nuclear matter were achieved in the HADES experiment now reported in Nature Physics. The physicists used a beam of accelerated gold ions impinging on a stack of gold foils. HADES is designed to detect the messenger electron-positron pairs out of a plethora of particles and to measure the electrons' and the positrons' momenta with great accuracy. From their mass distribution the physicists could deduce that the average temperature of the fireball formed in the Au-Au collision at an energy of 2.42 GeV per colliding nucleon pair was more than 70 MeV with densities up to three times the normal nuclear matter.

While densities and temperatures were very alike in both systems, the time and space scales of the two events differ vastly: 1000 meters for the neutron star merger simulation compared to 10-15meter for the heavy-ion collision. Likewise, the collision events differ in duration by 20 order of magnitude.

The ultimate goal: the equation of state

To achieve the ultimate goal and determine the equation of state of such extreme forms of matter, a lot of research is still ahead. To better probe the phase diagram of strong-interaction matter, it is important to extent such measurements to different collision energies. HADES will continue the investigations with substantially increased statistics. The <link https: www.bnl.gov rhic external-link-new-window internen link im aktuellen>Relativistic Heavy Ion Collider (RHIC) in Brookhaven, USA, or the <link https: home.cern science accelerators large-hadron-collider external-link-new-window internen link im aktuellen>Large Hadron Collider (LHC) in Geneva focus on the part of the phase diagram where the nucleons transform into a quark-gluon plasma. Future collider facilities are designed to have interaction rates a factor of 100 higher than present facilities. All of these experiments will significantly improve the understanding of strong-interaction matter under extreme conditions.